Peace Be With You

Along with many other missionary schools, this school was also nationalized by the government in the late 1970’s 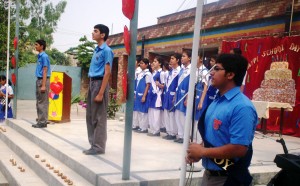 . As a result of the hard struggle of decades by missionary leaders, the government of Pakistan ultimately denationalized the school for which we cannot forget Late Archbishop Armando Trinidad, Fr Yousaf Mani and many others who struggled tirelessly to retrieve the missionary educational institutes.

After reclaiming the schools in 2000, the Catholic Board of Education took immediate steps to resume the schools. This school was inaugurated by the Archbishop Lawrence John Saldhana in 2002 as the third branch of the St. Anthony’s School. Like always the management had to face great difficulties in the beginning. We salute the pioneer Principal Sr. Luke who faced all the hardships with patience to give this institute a good start. In 2004 Sr. Nilanthi, the present Principal took over the charge and brought the school to a point where is is rated among one of the fastest developing schools of the city.

After 11 years the school now has a teaching staff of about 60 members, 800 students, a grand building with well equipped Computer and Science Lab and a Library with a significant number of books. For the last many years our students have been engaged in the Service Learning program through which they have learn to contribute profitably towards the society. They have become more independent in their thoughts and actions and are ready to face the situations frequently arising around us. The achievement regarding this was that in the Project Exhibition 2009and 2010 our school stood first among many other schools. We continue to have a period weekly for the service learning as it is made the part of our curriculum. Another achievement worth mentioning us the Board results of the first batch of our won school which has been with us from the play group. Among the girls, a student secured 980 marks excelling all the previous batches. In 2009 our school won the trophy for the English Debate Competition. We have two separate Western brands, one for the primary section and the other for the post primary section. For last three years we remained the proud winner of the English Handwriting Competition organized by the Ali Institute. Among the participants were all leading schools of the city. We have got our Cambridge section and our first batch of O Level is to appear for the exams in November 2014.

We now look forward towards our students to leave the portals of St. Anthony’s to become dedicated citizens and bring good name to their institute.